Is History Repeating Itself?

Reference:    The Scientology Reformation: What Every Scientologist Should Know

Is history repeating itself?

One of L. Ron Hubbard’s favorite sources for history study was Will Durant, and his several encyclopedic volumes, The Story of Civilization. Ron mentions Durant in many of his lectures and books. He even dedicated his book Science of Survival to Durant, along with 22 other philosophers and thinkers. I am reading that from my 1951 first-edition copy of Science of Survival at this moment, and there it is, right under “Credit in particular is due to:”. Will Durant is right up there along with Socrates, Voltaire, Thomas Paine, Thomas Jefferson and a number of other historical giants. Now, that brings us to our first invitation to inspect. Inspect your “Golden Age of Knowledge” edition of Science of Survival. Do you see Durant’s name on the dedication page? Do you see the name of any of the people L. Ron Hubbard originally said were due particular credit?

Since LRH felt so indebted to the 23 men he acknowledged for their help in formulating the truths of Dianetics and Scientology, I took it upon myself to read much of Durant’s history, in an effort to learn about them. Doing so gave me a much deeper appreciation and understanding of the technologies Ron developed.

In reading Durant’s historical work, I was also struck by parallels between humankind’s history and the history of the Scientology movement. Some of the most profound of these similarities appeared in the events which took place during the era of the Protestant Reformation. The Reformation occurred during the 16th century, when the 1,500-year monopoly on the Christian religion was busted. Beginning some time after the death of Jesus Christ and continuing until 1517, there was only one significant Christian church: what is now known as the Catholic Church. Over those many centuries the Catholic Church became all-rich, all-powerful, and also quite political and ruthless in guarding its worldly wealth. In the process it also became, by definition, the antithesis of what Jesus Christ stood for. Such principles, for example, as “the meek shall inherit the earth” and “the chance of a rich man entering the Kingdom of God is less than that of a camel passing through the eye of a needle.”

Reading that history reminded me of something LRH had said in a series of lectures he considered – to the day he died – to be the most complete and accurate dissertation on the subject of OT (Operating Thetan, the highest level of spiritual attainment in Scientology): The Philadelphia Doctorate Course, or PDC.

Let’s take the subject of Scientology and let’s see if there’s any logic involved with it at all. There isn’t a mathematics that can embrace the subject of Scientology, because it is an invented mathematics. It’s an invented mathematics that accepts gradient scales and “absolutes are unattainable.” And it is a method of thinking about things. And it is just as true as it is workable. And no truer. And is not, in itself, an arbitrary, fascistic police force to make sure that we all think right thoughts. It’s a servant of the mind, and servo-mechanism of the mind. It is not a master of the mind. Scientology will decline and become useless to man on the day when it becomes the master of thinking. Don’t think it won’t do that. It has every capability of doing that.

Contained in the knowable, workable portions before your eyes there are methods of controlling human beings and thetans (spiritual beings) which have never before been dreamed of in this universe. Control mechanisms of such awesome and solid proportions that if the remedies were not so much easier to apply, one would be appalled at the dangerousness to beingness that exists in Scientology.

Fortunately, it was intelligently invented, and I say that without any possible bow; I say that because part of its logic was: the remedy should exist before the bullet.

So anybody that knows the remedy of this subject, anybody that knows these techniques, is himself actually under a certain responsibility – that’s to make sure that he doesn’t remain a sole proprietor. That’s all it takes, just don’t remain a sole proprietor. Don’t ever think that a monopoly of this subject is a safe thing to have. It’s not safe. It’s not safe for Man; it’s not safe for this universe. This universe has long been looking for new ways to make slaves. Well, we’ve got some new ways to make slaves here. Let’s see that none are made.

It made me think that perhaps Ron was thinking of that very history of the Christian religion and the Protestant Reformation, which clearly he had read about in Durant’s books. After all, the medieval Catholic Church had made reading the bible illegal. It used the promise of salvation as a tool to enslave. It tortured and killed those who dared to disagree, or had the temerity to inspect for themselves. And after 15 centuries of escalating abuse and control, the only thing that worked to reverse that state of affairs was the busting of the monopoly. The Protestant Reformation was in essence just that –  a break up of the monopoly on Christianity. Its two critical aspects were (a) freeing the material of Christianity to everyone through translation, publication and wide distribution of the Holy Bible, and the consequent recognition that people did not need a vicious, bureaucratic and corrupt institution between them and God, and (b) the formation of hundreds of Christian churches, based on the principles contained in Christ’s teachings…

Read the rest, obtain your copy at Amazon.com, The Scientology Reformation. 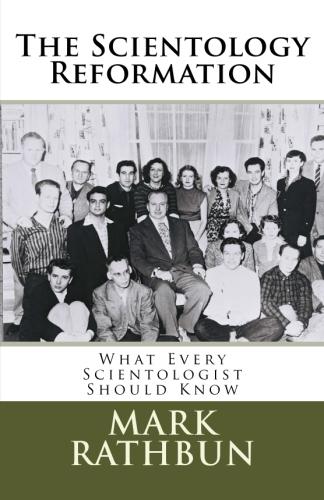 164 responses to “Is History Repeating Itself?”