My respects to Malcolm X

May 19th is the birthday of Malcolm X. The life of Brother Malcolm has had a profound effect upon me personally. His autobiography chronicles obvious parallels to our struggle in his discovery that a sect leader had severely corrupted the religion he had devoted his life to defending, and his journey to discover that that religion stood for love rather than hate.

On another level Malcolm did what we are trying to do for our fellows. That is, to straighten up their spines. To make them walk tall in spite of generations of propaganda telling them they should not.

The following passage from The Judas Factor by Karl Evanz recounts how Malcolm even gave  Reverend Martin Luther King a spinal adjustment at a time when he needed it:

…Malcolm was in the visitor’s gallery in the Senate building in Washington, D.C., listening to the heated debate on the proposed Civil Rights Act of 1964. When he returned to the gallery on March 27, he saw three rows in front of him the man he publicly ridiculed but privately admired: Dr. Martin Luther King, Jr. The two men who together symbolized the political conscience of Black America, acknowledged each other by simply nodding with a smile.

(blogger note: the “debate” was in fact a warm up for a  filibuster being organized by Southern Senators in an effort to kill the legislation; a problem Dr. King apparently had no answer for)

Afterward, as Dr. King, the Reverend Ralph Abernathy, and their entourage walked down the steps from the gallery, they noticed Malcolm X was only a few feet in front of them. King had been tremendously impressed by Malcolm X’s recent public statements urging African Americans to vote; the statements implied that Malcolm X believed that democracy could work to the advantage of America’s disenfranchised minorities.

But the SCLC president (King) was probably dismayed by the proviso Malcolm X added to his endorsement of voting, which was that African Americans should combat violence with violence when necessary for self-defense.

The crowd came to a standstill at the bottom of the stairs, and Dr. King and Malcolm X were suddenly standing side-by-side. An Associated Press reporter, stunned by the sight of America’s two foremost black activists conversing – in public no less – asked them if they’d agree to a brief interview. Both readily complied.

The reporter asked them whether they had reached any agreements in principle on the direction the civil rights movement should take, and whether Malcolm X considered the Civil Rights Bill important.

“I’m here to remind the white man of the alternative to Dr. King,” Malcolm X said, flashing his trademark Cheshire cat grin. “If the white man rejects the proposed Civil Rights Bill which Dr. King supports, members of the doctor’s organization – and hopefully Dr. King himself – will hopefully coalesce with the Muslim Mosque, Incorporated, in order to effect an end to the racial, social and economic oppression of the black man here in America.”

“How long do you expect the debate to continue?” the reporter asked, facing Dr. King. “A month would be long enough,” King answered sternly. “A creative direct action program will start if they are still talking about the bill after the first week in May.”

What would happen, the reporter wanted to know, if the debate continued beyond that point?

“At first,” King replied, “we would seek to persuade with our words –” King paused for effect, and said, “then our deeds.”

The words had an ominous ring, considering that Malcolm X, the man the press often referred to as the ‘angriest Negro in America,’ was standing beside the man known as America’s ‘apostle of nonviolence.’

Then, as if to remove any doubt about the import of his statement, Dr. King made a prediction. “If this bill is not passed,” he warned, “our nation is in for a dark night of social disruption.”

As King and Malcolm X smiled approvingly at each other, with Abernathy standing in the background, photographers captured on film a moment in African American history that FBI Director Hoover interpreted as an act of treason.

(Blogger’s note: Shortly thereafter, President Johnson – the pragmatic Texan he was – began twisting Senators’ arms in private to end the filibuster and pass the legislation. The rest is known history.)

Finally, in honor of Malcolm’s legacy here is the final 8 1/2 minutes of Spike Lee’s film ‘X’, which includes the beautiful eulogy delivered at Malcolm’s funeral by Ossie Davis. 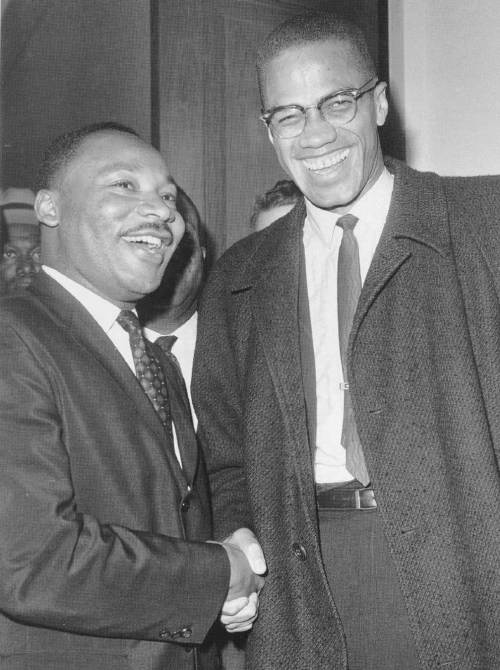 Didn't you think they were enemies? The haters only led us to believe that.

Now is the time to step up.

By this time in November the playing field is going to look entirely different. The amount of people looking for answers and direction is going to exponentially increase between now and then. The creation of communities is vital for the benefit of your friends and loved ones who are going to be confused and in some ways at a loss.

DM’s minions are stepping up on me pursuant to their boss’ inability to evaluate. It is all “over there”, being created by the “kingpin.” Kingpin must go down. Even the choice of moniker is telling. From the dark depths of a criminal mind DM wants to believe we are some hierarchical mafia outfit with similar intentions and motivations to his own. If only one missile really lands on target, it is back to business as usual so he thinks.

The beauty of community, as opposed to strict hierarchy, is that anyone, me included, can go down and it doesn’t put a dent in the cause. And wrong target as an SP will, DM is banking on taking me out. It will only get more intensely wrong targeted over the next few weeks. Of that I am certain.

There are whispering campaigns (right out of PR Series 18) starting up in our midst date coincident with talk of forming communities. I am going to quote again a short passage from Malcolm X on the subject of such Black propaganda camaigns as it is more relevant today than ever:

“One of the best ways to safeguard yourself from being deceived is always to form the habit of looking at things for yourself, listening to things for yourself, thinking for yourself, before you try and come to any judgment. Never base your impression on someone on what someone else has said. Or upon what someone else has written. Or what you read about someone that somebody else has written. Or upon what you read about someone that somebody else wrote. Never base your judgment on things like that. Especially in this kind of country and in this kind of society which has mastered the art of very deceitfuly painting people whom they don’t like in an image that they know you won’t like. So you end up hating your friends and loving their enemies.”

It is interesting that many Americans have come to dismiss wise words like these as having come from an “extremist.” Well, that is the term DM is now having applied to me. He’s got me up on his Religious Freedom Watch – thinly veiled front group – as an “extremist.” I’ve tried to contact Joel Phillips – the Kool-Aid drinker who operates the site – but he, like Miscavige, is avoiding me like the plague. Apparently, it is bunker mentality time.

But since he has settled on the term “extremist” after such brilliant lines as “lunatic”, “caveman”, and “thug with an e-meter” got no traction, let’s look a little more closely at the sobriquet. I am sure others doing their part will also soon be so labeled. So, what about this new label? Is it something we should defend against, something we should resist? Just what is an extremist? I found this passage from Martin Luther King’s Letter from an Alabama Jail Cell which had an impact on how I view this latest attack:

“…I have tried to say that this normal and healthy discontent can be channelized through the creative outlet of nonviolent direct action. Now this approach is being dismissed as extremist. I must admit that I was initially disappointed in being so categorized.

In my view the answers to both of the good Reverend’s two final rhetorical questions, in our case, are the latter. What do you think?

Ghost in the house

“So, I feel responsible for having played a major role in developing a criminal organization. It was not a criminal organization at the outstart. It was an organization that had the power, the spiritual power, to reform the criminal. And this is what you have to understand. As long as that strong spiritual power was in the movement, it gave the moral strength to the believer that would enable him to rise above all his negative tendencies. I know, because I went into the movement with more negative tendencies than anybody in the movement. And just faith in what I was taught made it possible for me to stop doing anything that I was doing and everything that I was doing. And I saw thousands of brothers and sisters come in who were in the same condition. And then whatever they were doing, they would stop it overnight, just through faith and faith alone. And by this spiritual force, giving one the faith that enabled one to exercise some moral discipline, it became an organization that was to be respected as well as feared.

“But as soon as the faith in the movement, the faith in the minds of the people in the movement was destroyed, now it has become a movement that’s organized but not on a spiritual basis. And because there is no spiritual ingredient within the organization, there’s no moral discipline. For it now consists of brothers and sisters who were once well meaning, but now who do not have the strength to discipline themselves. So they permit themselves to be used as a machine for a man who, as I say, has gone senile and is using them now to commit murder, acts of maiming and crippling other people.

NOTE: The Autobiography of Malcolm X has been added to the Recommended Reading section of this blog – just after Frederick Douglass.