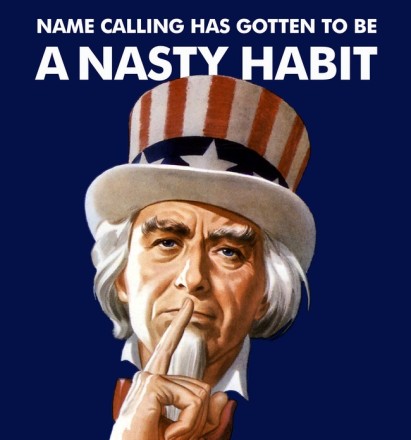 One thing that I have observed over the years is that name-calling and affixing derogatory labels to people usually exacerbates any perceived shortcomings in the target.  It is in the nature of people to defend themselves when under personal attack.  When it comes to using labels and name-calling to make nothing of the target, oft times the target reinforces the behavior labeled in an effort to somehow vindicate himself.

Name-calling seems to be an ingrained habit with some.  Folks might take some form of temporary satisfaction by considering themselves greater than those whom they condemn by shouting condemnatory labels. But, in the long run they are not really lessening the target nor are they increasing their own stature by doing so.  To the contrary, they wind up lessening their own integrity by defining themselves in the context of their chosen nemesis.  That fact alone makes them the effect of and thus less than their perceived enemies.

A valued teacher of mine once said ‘when you point your finger at someone, look to where your other three fingers are pointing.’