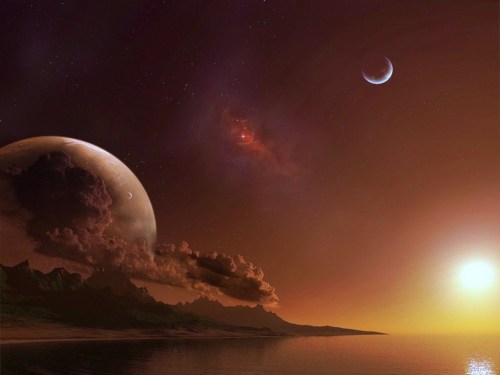 Studies in science and consciousness (e.g. Tao of Physics by Fritjof Capra, Biocentrism by Robert Lanza, The Field by Lynne McTaggart, My Big T.O.E by Thomas Campbell, etc.) have demonstrated through a variety of means that time and space are constructs of  human and animal minds.  They have no independent, observed or tangible reality in and of themselves.  We create them in order to establish dimensions within which to survive amongst and with other organisms and to play games.

Transcendent experiences, such as enlightenments, peak-experiences, even Scientology releases, are instances where the automaticity of creating time/space constructs are ceased – even if for the briefest of spans.  At those moments we experience more of the true nature of the universe and its interconnectedness. Here is the realm where psi (psychic phenomena – or theta perceptics – such as clairvoyance, precognition, psychokinesis, and telepathy) activities are observed and exercised. That reality only appears perceivable and achievable outside of our mental time and space constructs, which by their very purpose and definitions create the apparency of separateness.  Those transcendent experiences are often far and few between for folks because they have so permanently implanted upon themselves – and begun to mistake for ultimate reality – the reality of the time and space constructs they create. But, the more frequent a practice makes their experience possible, the more chance we have of, as Ken Wilber put it, converting temporary states more toward more permanent traits.

L. Ron Hubbard’s Dianetics and Scientology processes are exercises in restoring the ability to cease the automaticity of creation of time and space.  Understood in this context, it is very easy to run processes, to run groups of them (grades/levels), or even the complete program (or Bridge), to their fullest potential gain.  Not a lot of duress and dogma designed to instill unswerving devotion and surrender is required to bring about ability when that simple, if all-encompassing, framework is kept in mind. When viewed against this scientific/consciousness field of evolving, tested context Hubbard processes can become as natural and simple to deliver as driving an automobile.

I think the more a practitioner appreciates these facts, and our increasing objective (scientific) understandings and how they relate to consciousness, the more proficient, effective, and empowering his or her practice becomes.

This ability can become unachievable in Scientology; much in the way it has in many other practices.  There are a number of reasons for this.  However, all of those factors can be recognized and understood to one degree or another as invitations or commands to build further time/space constructs, and to believe so implicitly in them that one – once again – puts the process on automatic.  Whatever titillating or inviting backdrops against, or foundations upon, which one presents such enticements to build new mental constructs, they still have the same regressive effect ultimately.  They send one back down the rabbit hole of time/space construction, which after enough practice ultimately to one degree or another goes back onto automatic.

Consequently, a simple axiom evolved for me that I have found useful in studying and applying any work in the fields of spirit, philosophy and psychotherapy.  To those cemented into the permanent constructs some paths tends to embed one in, this will sound like the most rank heresy.  To those not so embedded, it might help keep you from falling into the wet concrete looming along certain paths.  It is simply this, to the degree data assists with relieving additives to the mind that enforce automatic time/space construction it is valuable; conversely, to the degree data invites introduction of additives that further automatic time/space construction it is destructive of higher awareness and states of consciousness.

99 responses to “Time and Space”