Contemplating the toxic waste that has come from the tortured mind of David Miscavige and relayed to the world by Scientology Inc and their ethics-challenged attorneys of late, I thought it might be a good time for some clarification.

During my hiatus from the subject of Scientology – 05-08 – I spent a great deal of time studying the abolition movement of the 19th Century.   That included a lot of reading of the works and about the lives of the leading lights of America’s second revolution; including Paine, Emerson, Garrison, Thoreau, Harriett Tubman and Frederick Douglass.  I worked during ’06 with an educational entertainment teacher I met at the Buffalo Soldiers Museum in Houston.  She recruited me to play Old John Brown to her Harriett Tubman.  We were invited to perform at the 2006 NAACP convention in Washington D.C.  We traveled with all NAACP delegates by chartered train to Harper’s Ferry for the NAACP’s special commemoration to Brown and W.E.B. Dubois.  Here is “Harriett” and me at the reconstructed old fire house at Harper’s Ferry where Brown made his last stand: 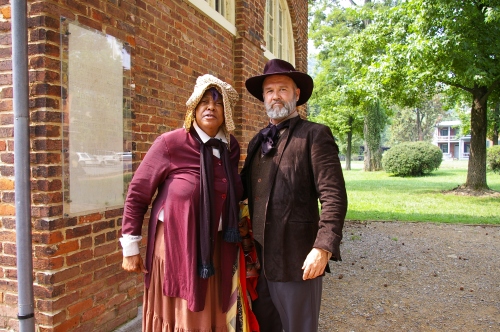 During this period, probably the most influential work that directed my attention back to Scientology and contemplating the effects it had had on me and others was Narrative of the Life of Frederick Douglass, An American Slave.  Particularly compelling to me was Douglass’ description of his childhood realization of the first – and most viciously enforced – mechanic of slavery.  That rule was that slaves were prohibited to learn.  It is understandable.  The slave holders correctly reckoned that if a slave learned to read it might lead to independent thinking.  It might also lead to reading books and learning about the world outside the plantation.  And of course that could lead to notions about expanding one’s horizons and leaving slavery in order to do so.

This 05-08 period really informs everything I have attempted to accomplish since.   Abolition of slavery.

My first public utterance about Scientology was posted in February, 2009.  It has been continuously posted since, as the Welcome Page on this blog.  Since that time it encompasses everything I have said and done in relation to David Miscavige, Scientology Inc., the subject of Scientology and Scientologists.

This ride has entailed operating an underground railroad to assist with the physical escape from slavery.  Remember the chronicles of John (JB) Brousseau and Daniel Montalvo.  When those bright or desperate enough to make that move called, we were there for them (and still are should the need arise again).

Having counseled somewhere upward of 150 people directly, and hundreds more through correspondence, and having continued our own education and evolution through the journey, I find we are still holding true to the original representation on the Welcome Page.   However, having evolved and having studied the origins and mechanisms of Scientology and its particular effects on Scientologists from all walks of life, we have learned about its sophisticated mechanisms that create mental slavery.

It was puzzling to us that David Miscavige would continue to be obsessed with us after we did everything in our power to move away from confrontation, give him the benefit of the doubt in published essays and books, and simply assist individually with those former slaves who needed a hand straightening up their spines and freeing their minds.

It was only a review of this broader history and its context that answered the conundrum for me.   It serves to confirm for me that in fact we are accurately discovering and communicating the slave master’s ‘tech’ for manning his dwindling plantations.  His response is the same as the nineteenth-century slave holders’s response to the abolitionists.  That is, attempt to re-enslave them or to ruin them utterly of course if possible, short of re-enslavement.

This review also informs my future.   My work is only just beginning.

Scientology’s slavery will be abolished.

500 responses to “Abolition of Scientology Slavery”