Hy Levy is in the Hereafter

Hy Levy passed away in his sleep last night.   A couple weeks earlier he told Mosey and me that this was just the manner in which he wished to pass. He died of complications caused by cancer.   Hy was diagnosed late last year.  He chose not to fight it.

Hy felt blessed to have friends like Pat Shannon, Carol Kramer, Laura and Mike Wilson and his brothers and sister-in-law.  They went out of their way to try to convince and facilitate Hy to fight the cancer.  When Hy made it clear that that did not align with his intentions, those friends did everything they could to support him, comfort him and buoy Hy’s spirits.

Hy particularly loved being Jewish-mothered (his words) by Pat, Carol, and Mosey.  He even took to calling Mosey “Sophie” when he wanted to let her know he noticed the extra care.

We were honored and blessed to host Hy for nearly the entire month of April.   Hy worked with me for a few days on rehabilitating his confidence on exteriorizing from the body.  Once he felt comfortable with that all he wanted to do was enjoy himself.  Hy considered Casablanca was his Shangri-La, he sent us a copy of Capra’s original 1937 Lost Horizon so we would fully understand the significance to him.  He just wanted to be here, sleep when he wanted, get up when he wanted, sit by the canal in the sun or shade scratching Chiquita’s belly and having long calls with Pat or Carol or his family members, taking long drives with me and talking about the hereafter, but most of all getting fussed over by Mosey.   Hy’s favorite song was Live Like You Were Dying.  It inspired him to make up a bucket list for his last couple weeks here. It wasn’t as dramatic or adventurous as in the movie by the same title, but it was what Hy wanted.  Thanks to the saint-like support of Laura and Mike Wilson and Mike Laws and Yvonne Schick, Mosey and I to were able to help Hy accomplish his bucket list to his satisfaction. 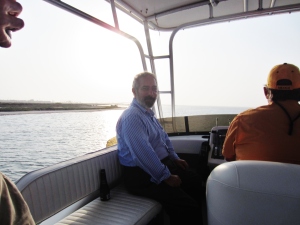 Hy chilling to Jimmy Buffett on a sunset cruise

Hy wanted to stay, but felt he needed to get back to spend time with his family and have a proper Jewish funeral.  That was carried out early this afternoon.

Hy did a lot of good for a lot people.

He was from the old school of Scientology registration.  Sure, he had to make his money quotas. But, Hy was concerned with doing whatever he could to facilitate people to move up the Bridge.  As Scientology Inc became increasingly commercial and greedy in it is registration practices, Hy Levy found himself getting into trouble for helping Scientologists navigate around the crush, hard-sell pressure to give up their homes and retirements funds.  The last ‘crime’ Hy Levy was punished for in corporate Scientology was helping a person to reverse a transaction that Scientology Inc had performed on that person’s account without the individual’s consent.   Hy had to stick his neck out to undo larceny committed by Scientology Inc on its own public. Shortly after Hy parted ways with the corporation.

All Hy really wanted to do was to prove to himself he could catch up with the computer programming profession he had left for more than twenty years, and make enough money to enjoy the simplicity of freedom.   Hy accomplished that with flying colors.

Hy could have left it at that.  But, Hy cared about people.  He cared about Scientology being hijacked and used to harm rather than help people.   To speak out would be tantamount to forfeiting the quiet simplicity he longed for and attained.  Against his own self interest, Hy stood up and spoke out loud.  He exposed the Scientology Inc. money machine,  see Tampa Times The Money Machine.  By doing so, Hy saved a lot of people from facing financial ruination at the the hands of corporate Scientology.

Hy will always be a hero in my book.

He will always be our friend.

We love you Hy Levy.