Learn to Evade Tax at the Scientology Chapel

Bruce Wiseman and Kevin Burke are corporate Scientology stalwarts.   They are the name partners of Wiseman & Burke the firm that makes money by handling the money of corporate Scientologists with big bucks.  Wiseman is the wise guy who puts out the creepy,  world-conspiracy paranoia tracts that justify so much corporate Scientologist unlawfulness (some under the handle John Truman Wolfe).   Incidentally, he rails about the bankers who produce nothing but make their money off of the labor and money of others; and guess what Wiseman and Burke does for a living?  He also appears on television and lobbies elected officials on behalf of Scientology Inc front group CCHR (Citizens Commission on Human Rights).   Burke has covered Wiseman financially for years so that he could play out the Scientology Inc. demagogue gig full time.

Wiseman and Burke are opinion leaders in the corporate Scientology field, and are fully backed and sponsored by the David Miscavige administration.  Here are only two of many recent examples of church premises being used by the duo to ply their trades and pimp Miscavige causes: 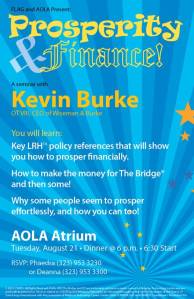 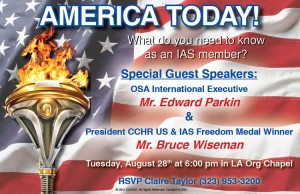 Now, here’s the rub.   Scientologists who come to hear these guys are shielded by artful use of compartmentalization of information only possible under Miscavige’s repressive Disconnect policies (keeping people it the dark by severing all their ties to friends, family and business contacts should they discuss or forward any unauthorized information about those in good stead with Miscavige).

Now, see this edict issued by  STATE OF CALIFORNIA, BUSINESS, TRANSPORTATION AND HOUSING AGENCY of  the DEPARTMENT OF CORPORATIONS:

DESIST AND REFRAIN ORDER ON WISEMAN AND BURKE

The upshot of all this is that the IRS-recognized, tax-exempt ‘church’ of Scientology is using their American taxpayer subsidized premises to sponsor and host seminars by folk who have been ordered by the State of California to cease and desist with their off-shore, TAX EVASION consultation services.