I promised the folks of IOB that if the cult insanity escalated to the point where it was a threat to ruining this town, I would up and leave in a heart beat.

Well, the latest from David Miscavige’s Scientology dirty tricks and propaganda service has crossed that line.

In the past several weeks we have discovered and published evidence that Scientology Inc spent 90 thousand dollars on rent alone to lease a home facing mine, and outfitted it with high powered cameras focused into our home, The Rest of The Story – Scientology Inc Spies.

After our exposure Miscavige’s terror squads upped the ante by placing mirror coverings on all windows of the 90 thousand dollar surveillance outpost.   That had a chilling effect on a number of local residents.  When that was exposed, Scientology Inc sent in a squad of “fishermen” who looked like they came out of the casting call for the movie “Deliverance.”   For several weeks they have yet to wet a hook, nor communicate with any locals.  Instead, they sit behind their mirrored windows of the surveillance house leering menacingly.

The head honcho of the crew refused to identify his employer nor even the identity of who leased the premises to his boys.   He claimed to have never heard the names of the leasee (Scientology PI Monte Drake who has committed to 3 more years in that home) or the owner of the home.   He threatened me with arrest if I did not get off his property.  He did make a big point though of pointing out the following decal on his truck and telling me how proud he was to be a Confederate: 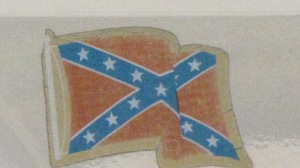 I am not waiting for the cross burnings and whatever other snazzy PR tricks Miscavige has in store for IOB.   We are sad today to be leaving some of the finest people we have ever encountered.  We did not give advance notice to most because they would have convinced us to stay.  We are holding to our original promise.  The ‘church’ of Scientology has created a pall over one of the greatest little towns in the US.  And it is quite apparent there is only one way to remove it.  I am not going to try to dress up an ugly situation.  You are damn right we’ve got the blues.

Mark Collette of the Corpus Christi Caller Times filed this report on the latest from Ingleside on the Bay Texas.