Disdain For A Valuable Human Life

The certificate indicates that the manner in which Miscavige treated Annie and her family was far worse than originally reported here on 14 January, Ann Marie Tidman In Memoriam.

Please examine line 107 “underlying cause” of death.  It notes “Non Small Cell Lung Cancer” with a “time interval between onset and death” as “14 Months”.

Given that her date of death was 14 June 2011, that puts the onset of the lung cancer as mid April 2010.  That means when John Brousseau learned of her lung cancer it was right at its onset, since JB left the Int base in the last week of April 2010.

Our efforts to inform Annie’s family on her condition behind the walls of Miscavige’s prison began immediately upon JB’s escape.  That was because I predicted to JB that Miscavige would keep this matter a secret until her death so that no one would have an opportunity to hear the truth from her last years with L Ron Hubbard.  We agreed that the only chance for her recovery was for Annie to be as far away from Miscavige as possible as he had a vested interest in her passing quickly and quietly.  And that is why we set the machinery in motion immediately.  That is also one of the reasons why JB and I traveled to the Int base on June 5, 2010, see post report The Citadel.   Before we made the loud, overt approach reported in the post, we attempted to call Annie’s cell phone to inform her we were in the vicinity to assist her to escape.  Annie did not answer the call.

That Miscavige prevented family knowledge of the disease through and beyond her death is inhumane.  The felony is compounded by the death certificate which tells us that Annie was ordered by Miscavige to withhold her condition to her family from the onset; a point in time where cure was clearly possible.

Next, please note line 26, name of informant.  “Catherine Fraser” is the Port Captain for Miscavige’s prison camp known as the International Headquarters at Gilman Hot Springs California.  The Port Captain’s first and foremost duty is to obstruct the discovery of and cover up any crime committed by David Miscavige.  But, here is the damning part – look at the four letters by Ms Fraser’s name DPOA.  Wikipedia defines DPOA as follows: DURABLE POWER OF ATTORNEY: Under the common law, a power of attorney becomes ineffective if its grantor dies or becomes “incapacitated,” meaning unable to grant such a power, because of physical injury or mental illness, for example, unless the grantor (or principal) specifies that the power of attorney will continue to be effective even if the grantor becomes incapacitated. This type of power of attorney is called “power of attorney with durable provisions” in the United States or “enduring power of attorney” elsewhere. In effect, under a durable power of attorney, the authority of the attorney-in-fact to act and/or make decisions on behalf of the grantor continues until the grantor’s death.

With malice aforethought David Miscavige had Annie (in who knows what state) sign over her right to make decisions concerning her own life to the Port Captain Gold (who is an unquestioning Miscavige loyalist; if you doubt that see Ms Fraser’s performance on Anderson Cooper’s Mar/Apr 2010 series Scientology: A History of Violence).

Finally, please see line 1 place of death “address”.  It is marked “1830 N Bronson Ave, Los Angeles, CA”.  That is the address of the apartment building for Celebrity Center International staff directly across the street from the Church of Scientology Celebrity Center.

For the last several months of Annie’s life her family tried to reach her by phoning International Headquarters.  The phones were answered by staff whose handling of such calls is closely monitored by the Port Captain (Cathy Fraser) who told Annie’s family that Annie was too busy working there to be bothered with them.  The family, out of respect for Annie, and for her eighty-one year old Sea Org member mother at Scientology Inc’s Clearwater Florida center, respected “Annie’s” wishes (ordered communicated no doubt by her DPOA under the micromanagement of Miscavige).  All the while Annie was dying in Apartment 336 smack dab in the middle of Los Angeles, where a visit from her family could not possibly have bothered the tyrant’s security or privacy concerns or even distracted him from the innumerable other cover-ups consuming his busy day.

As a last macabre note, see line 40 – location of delivery of the body cremation remains – 19625 Gilman Hot Springs Road, Gilman Hot Springs California, Scientology Inc Headquarters compound – right into the hands of Miscavige’s designated DPOA.  It was not until six months after Miscavige personally disposed of any remaining trace of the body that Annie’s family even knew of Annie’s passing – and only then because we made it known.

This investigation is not over.

Thanks again to Karen De La Carriere for her deft deployment of  investigative resources.

Ann Marie Tidman Broeker Logan passed away on June 14, 2011. Annie was L Ron Hubbard’s closest friend and his exclusive direct personal and business aide during the last several years of his life.

Shortly before John Brousseau (JB) left the corporate church in April 2010 he was told that Annie had contracted lung cancer.  Since then a network of friends on the outside has sought to assist her knowing full well the suppression she was under that would cause such a scourge to invade her body.

Members of Annie’s family outside of the church phoned Annie and inquired about her health.  On the few occasions since mid 2010 that they managed to be put through Annie denied having any health problems.  Since June of 2011 no family has reached her, instead they were rebuffed by corporate Scientology staff saying she could not be reached. A family member last called for Annie at the Int base in Hemet California within the past two weeks.  The family member was told  that “Annie can’t talk to you now.” 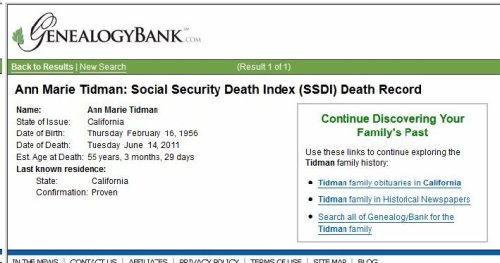 Apparently, Miscavige has covered up the death of Annie Tidman for more than half a year, after covering up her contraction of cancer for nearly two years.  Such callous, heinous disregard for life and the feelings of family and friends demonstrated by Miscavige’s “church” knows no comparison in a civilized society.  In this case it is all the more unconscionable.  No one served L Ron Hubbard for longer and with more dedication than Annie,  with the sole exception of LRH’s wife Mary Sue. And so there is little wonder why Miscavige prevented anyone from outside his cult from speaking to, let alone questioning Annie before her death.

Irrespective of what Annie may have been coerced to sign prior to her passing, I’ll always remember her for what she stood for twenty years ago. When I intercepted Annie during her 1992 attempt to reunite with her then-husband Jim Logan, we flew alone across the country overnight in John Travolta’s private jet.  Annie, in the inimitably vague manner in which such prohibited thoughts must be shared within corporate Scientology, communicated in so many words the following, she was returning to the Int Scientology base for one reason alone: to protect LRH’s legacy from David Miscavige.

Annie held on for nearly twenty years of living hell, attempting to out live Miscavige and restore some sort of order. For those who knew Annie and for those who understood her relationship with L Ron Hubbard, worry not.  I know for a fact that she is now doing ok.

I have tender memories of Annie  ~~ the first messenger I audited on the Apollo ~~ I was struck by what a gentle soul she was, so kind, so warm and so darned likeable.
Annie grew up in the Sea Org and knew no other life as a 2nd generation Scientologist.  Her loyalty and dedication was fierce.  She like very few others  witnessed  and experienced from the inside how mad it had all become.   She could compare the THEN and NOW.  The LRH way  vs Miscavige brutalities.There is an ability of the body to fight cancer. A resilient spirit all set out to fight it will send cancer into remission but not so when one has a broken heart.Annie, you were one of the finest.  You touched the heart of everyone you encountered. Fly high with the Angels.
– Karen de la Carriere
———–
I first met Annie in 1973 when she was already a favorite Commodore’s Messenger on the Apollo. She epitomized  a true friend of LRH.  It was no fluke that she was the one who was in the right place at the right time and went off with LRH to become the person he relied on as his aide, confidante and friend in the twilight of his life. Annie was kind, smart and concerned for the well-being of others.  Power and status was meaningless to her.  What was important was her dedication to LRH and his legacy. If you searched the world to find someone who represented most closely the qualities he stood for – you would be hard pressed to find someone who filled the bill better than Annie. In the long history of Scientology that is still to be writ, Annie  will remain large and will never be forgotten, destined to be remembered as one of LRH’s truest friends.
–   Mike Rinder
—–

I can think of no better words to conclude with here than those penned by L Ron Hubbard:

Our suff’ring is self-centered here, for we have lost, in truth,

the smile, the touch, the skill and happiness we gained from Annie

who gave to us from her past ability to live

and fare against the tides and storms of fate.

and lost as well her counsel and her strength

But lost them only for a while.

Your people thank you for having lived

earth is better for your having lived

Men, women and children are alive today because you lived.

We thank you for coming to us.

We do not contest your right to go away.

Your debts are paid.

This chapter of thy life is shut.

and live once more in happier time and place.

All now here lift up Your eyes

and say to Annie