Miscavige started bypassing OSA on operations of a very sensitive nature several years ago. They were too incriminating and too illegal for OSA to be trusted with keeping them from winding Miscavige up in the news or jail. Keenan fancied himself a Cugine (a young ambitious gangster who will do anything to climb the ranks in the mafia). Keenan funded such operations by approaching former GO/OSA public (such as David Gaiman and Andy Hutton) for cash donations. Keenan would then give the cash to “media/invest professionals (MIPs)”(his operatives) so nothing about their dirty deeds would appear on church books. MIPs are generally alcoholic ex-Fleet Street tabloid reports who will do anything against a former colleague for a little drinking money. Keenan had a whole stable of them. 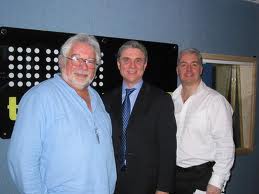 An MIP with Mike Rinder and Bob "Babbo" Keenan

In Autumn 2009 Keenan was summoned to the US by Miscavige and asssigned the task of taking me out, by any means necessary so as to squash the Independent movement. He set up a number of Wile E. Coyote operations many of which are still operating today, including the several juvenile anti-Marty web sites and blogs. All of his ops – backfiring as they inevitably do – have ultimately contributed to the forward progress of the Independent movement. Bob, who was once a cugine, is today merely a Babbo (a mafia underling who is considered to be useless).

The following is taken from a 2007 despatch from Miscavige in which he critiques a Bob Keenan proposed operation to “get Sweeney (John of BBC fame) busted.” The proposal was for a hired resource to befriend Sweeney so that he might set Sweeney up for some illegal activity that Sweeney would then be “gotten” for, fired by the BBC, discredited, and nullified as a threat.

MEDIA/INVEST PROFESSIONAL: Speaking of paying people, the only problem with this proposal is that if word leaks out on that, it sounds like we’re paying to “get Sweeney.” The budget isn’t the problem. Doing it on the product basis of “getting him busted” won’t look good if it comes out. You of all people should understand how this works. Solve it. Solve it while not losing the media professional.

Miscavige’s contribution to the plan to frame an internationally renowned journalist (a plan he ordered in the first place) was advice to adjust the wording so the word could not leak out that the church was paying someone for the product of “getting him (Sweeney) busted”, as that would backfire on the church.

In other words, Miscavige’s contribution is to encourage the illegal program, and to compound the felony with slick cover up.

Tommy Davis was right when he asserted to the St Petersburg Times that David Miscavige gives a whole new meaning to the term “religious leader.”