Since the the days of the Guardian’s Office (sixties) it has been Standard Operating Procedure for the Guardian’s Office and its successor the Office of Special Affairs to use Ethics files and Pre-Clear folders to attack current and former members of the church of Scientology. It is very difficult to prove since the church will not produce those files so that someone may demonstrate where the church obtained the information they attacked an individual with. Even if it requires sufferring the most severe financial sanctions, the church will not produce the files.

One way the church has gotten away with this institionalized invasion of privacy and privilege violation for decades is by walking a tricky little, black cat tight rope walk on the issue of Ethics files.   They have been able to successfully argue that Ethics files do not constitute Pre-Clear files and thus aren’t protected by the privilege when called out on using  confessional material against people.  They go so far as to transfer material from auditing files to ethics files in order to cover their tracks.

Well, David Miscavige’s latest Golden Boy, the Church of Scientology International’s International spokesperson, may have just done the world a tremendous favor.  While under oath this summer in the Headley cases he made a big mistake by speaking the truth in an unguarded moment.  Please read this carefully:

Q: Does the church of Scientology have files that it considers confidential?

A: We have priest-penitent privilege files.

Q: What would fall within the range of those files.

Mr. Deixler (C of S attorney):  Calls for a legal conclusion, I guess. But you can give your understanding.

A: Things of a priest-penitent privilege nature.

Q: Would that be an auditing file?

Q: Would it be an ethics file?

Never before has an official church spokesperson been pinned down under oath uttering this truth so clearly.

Thank you Marc and Claire. Your courageous efforts were not in vain – irrespective of the outcome on appeal.

Thank you Tommy.  I sense you did this subliminally for all the folks you have seen getting betrayed and slaughtered.  I am sure you are paying dearly for it. But, get out soon and you start with a clean slate after this one.

Think about it.  How many of you have had your Ethics file used against you publicly?

How many of you can prove it?

I know of several.

UPDATE:  A reader sent me a three-page Scientology Policy Directive that makes the cheese more binding: 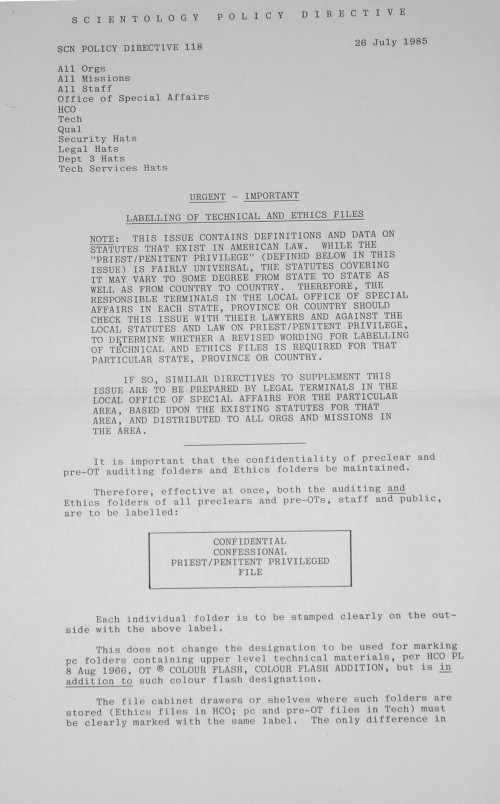