In November 2002 David Miscavige unveiled his first showcase Idle Org in Buffalo, New York.  Appended below is Miscavige’s order issued just prior to Buffalo’s grand opening to ensure the place would be crawling with public and expanding for the whole world to see.

Did anybody from Int ever notice the ‘hey-you’ character of most of Miscavige’s orders?  Notice the recipient (Int Landlord) of this order. He might as well have issued the order to the groundskeeper at Celebrity Center.  See after the Miscavige order evidence of the result. Nearly ten years later, a photo of the Buffalo Idle org taken just last week by an indie who happened to be visiting that city and stopped by to check out the original showcase. 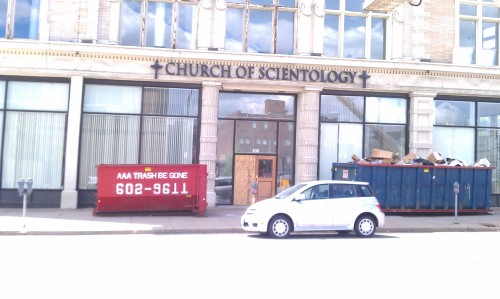 UPDATE 5/16:  See this interesting, and confirmatory, posting on an unrelated blog about the Buffalo organization posted as a comment to this blog post: Chris and Luke at Buffalo Org.

ps: don’t forget to keep Izhar informed of Idle Org proofs you come across at, http://idleorgs.com/