Here I am! I know and I apologize; I know I should have informed you much earlier about my whereabouts and future plans!

Eight months ago, I realized that I could no longer continue to support the out-tech and off-policy actions of the “Church of Scientology.” I have been working since to create an independent practice where I can deliver standard tech as LRH intended it to be delivered. 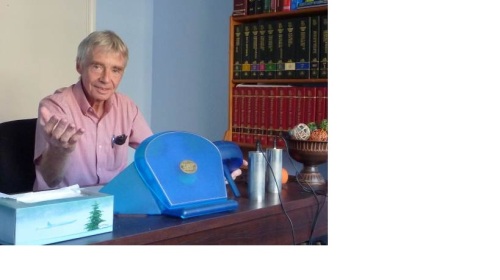 This has been an interesting, but likewise challenging time for me. It all started with my finally awakening and confronting of our situation with the Church of Scientology. And I am saying “our” on purpose because it is not, as I had been thinking for over five years, it is not only my own dilemma. My previous self-centeredness may serve as an excuse for not having stood up much earlier. Because of my realization, however, that I was misled in observing an appearance, rather than the reality, I now decided to act in a decisive manner.

My introduction to Scientology

It was Easter 1969 in New York City when I was introduced to Scientology; yes, John McMasters and Mario Feninger were present, and I immediately became an enthusiastic follower.

Since I couldn’t find any organization or mission in Pittsburgh, PA where I then lived, I changed my employer and moved to New York City – but that’s another story that I should write about on my own blog – and I moved up to the state of Clear and beyond to OT III.

When I look back, this era still represents one of my most exciting journeys with previously never experienced adventures and inroads into a terra incognita, the territories of my mind, or in a much broader aspect, the territories of the human mind.

One thing is true for sure: All of us share a common something that has, depending on one’s orientation, different names, such as the original sin, the monkey or, as Hubbard coined it, the reactive mind. It has actually nothing to do with you and me, however, it has become part and parcel of a package that all of us are carrying and that, to our detriment, unites all human beings on our planet in a very arbitrary and peculiar way.

Again, this is something completely outside the scope of my announcement.- Let me come back to what I wanted to talk about: The reason for this post!

I would like to give a very brief overview of the years following my exciting discoveries. After completing OT IIII, I envisioned a more important role for my life than to be working as an engineer, even though I loved my profession and had invested years of studying to acquire a masters and a doctors degree in engineering. Nevertheless, I was determined to become an auditor and help others to experience similar gains that I had received.

From 1974 to 1977, I went to Denmark where, at the Advanced Organization St. Hill, I completed my first auditor training and internships up to Class VIII. Later I redid my Class VI internship and the new NED course with internship at Flag and audited until 1980 at Flag’s Case Cracker Unit. With further tech developments I studied the Snr Sec Checker and FPRD courses with internships, did the GAT Pro TRs and Metering Courses at Flag and advanced up to OT VII.  In 2009, I enjoyed being a new GAT Class VI Internship graduate at ASHO of Los Angeles.

By now, for almost 25 years, my goals that I pursued with my field auditing group, the ARC Team, were:

• To provide a safe and undisturbed place where people find time for themselves,

• To guide those interested with the techniques developed by L. Ron Hubbard to achieve more spiritual awareness, more independence and more success in life,

• To deliver the lower Bridge from Life Repair up to Clear, and to have my pre-Clears well prepared for their further travel towards OT at an advanced Scientology organization,

• To provide a place where basic courses are available under standard course supervision,

• To be dedicated to deliver Hubbard’s technologies in the most standard way achievable. For this reason, all members of the ARC Team are not only highly trained interned auditors (from Class V graduate up to Class VIII), but also well advanced on the right side of the Bridge (OT III up to OT VIII).

None of this has changed!

While our ARC Team has remained a safe place to spiritually advance and to enjoy the many wins possible, I had to confront the ugly truth that there no longer exists an organization within the “Church of Scientology” that I could trust to lead my pre-Clears further towards OT!

I had to confront the ugly truth that the organizations of the “Church of Scientology” had changed. These institutions had come to treat my Pre-Clears, not too different from the screening at the airports, with suspicion. They had to undergo strenuous and costly security checks and had to prove their good intentions by more and more generous donations, not just for their services. Those surprises that acted as major distractions from their envisioned goals, my pre-Clears had not been prepared for.

More and more they became inclined to believe that they had come to help the organizations rather than be serviced by them. When those observations already created great concern, much worse was my discovery of the ongoing alterations of LRH’s tech particularly in regards to auditing which made it harder and harder not only to become trained, but to advance towards OT. For specific details, please resort to my blog:

The solution to the dilemma

For quite some time I was stuck with a great dilemma! I had been stuck and I was therefore willing to compromise in many respects, as long as I thought that our Bridge was solely available in the “Church of Scientology.”

To my greatest relief, however, I found out that LRH’s precious legacy had been preserved outside the parameters of the official organizations. It had not only survived, but it is in full blossom!

My last hesitations were blown away! There is a Bridge! And it is accessible! And it can be traveled because it is on source! Additionally, it offers a safer passage than the one under the control of those who pride themselves as being the guardians of Keeping Scientology Working!

Without further uncertainty, I have decided to part with the Church of Scientology!

As a member of the independent Scientology community I am offering now my services as an experienced Class VIII auditor!