Now that the Squirrel Busters have been busted by the American public in a small Texas town as chronicled in the Corpus Christi Caller Times, and about to be chronicled in even larger publications, Cult boss Miscavige is apparently fixin’ to switch out the bustees with Freedumb “reporters.”   Check this out this current ad on journalismjobs.com.

Grab your popcorn and soda as the meltdown intensifies. 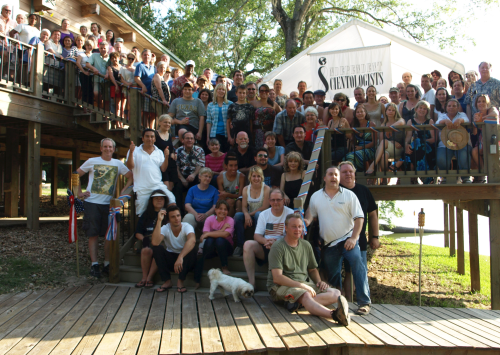 2011 group photo 90 folks up from 48 in last years.  Number of people willing and able to travel from 19 states and 4 foreign countries (including France, UK, Australia and Canada) and manage to make it to the photo shoot.

Today also marks the Four Millionth visit to this site.

On a few occasions over the past two years we have crossed graphs and surpassed Scientology.org and its 1,400 linking sites and Miscaviges millions spent on  enhancing its ranking (while we spend nothing).  However, we have exceeded their rankings almost continuously since mid April, right when their current, non stop daily insanities started being performed on our doorstep (The blue shirts first appeared on 17 April).

One stat Dave definitely has going straight up and vertical.  Rope production.

Oh, yeah – throughout this meltdown, we’ve been reversing Miscavige’s Black Dianetics on an average of two people per week.