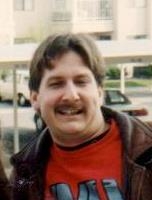 An old photo, but you get the idea

Dave Lebow of the infamous Las Vegas and Minton investigations fame (see SP Times Monday edition) is the perfect dramatization of the other Dave’s management style and case. He pitched up in Denver today. Was he going deep cover?  No. Was he doing some sophisticated investigation? No. He was attempting to terrorize Mike Rinder’s girl friend.

Yeah, like Tommy before him, Dave Lebow has been relegated to direct attempts to intimidate women.  Lebow tells Mike’s gal that he’s been staking out Mike’s apartment for days and sees no activity, he’d been surveilling her place and sees Mike’s car has been there but no sign of Mike. Lebow says he wants to know how to get hold of Mike, because “for god sakes, my photo is all over the St Petersburg Times.”  Dave is apparently livid at what he considers a terrible invasion of his privacy. Kettle…Pot…Black?

Dave told the woman he wanted to know how to get hold of Marty. Hey Dave, my email address is on my blog for tens of thousands to see and use daily. A photo of my freaking house is in your boss’s “Freedom” magazine.