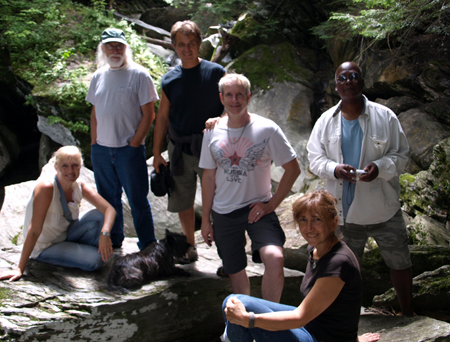 Steve Hall has apparently really got DM’s goat. The latter has targeted the creator of Scientology-cult.com with repeated infiltration efforts. He has three missionaires who used to be RTC (until DM dismantled the place in late 04) working frenetically to flip “friends” of Steve presumably to build a “dead agent” pack on him.  The irony is precious. All three missionaires doing DM’s bidding were historically disaffected as all hell with DM through the eighties, nineties and at least to mid 2000’s (Marion Pouw, Mike Sutter and Hansuili Stahli).  They were also notably incapable of duplicating and applying fundamental Scientology. Now, to compound the comedy, all the marks they have been flown around the world to handle were  severely disaffected with Scientology (yes, the subject – not the management or DM) when they approached me shortly after I put my webpage up several months ago. Since they seemed to have no use for the subject we fell out of comm. So, DM has only successfully brought back on board people who have no use for Scientology. A coincidence? I think not.

“Now thereness is simply a part of communication. It is the creation of a station or a terminal from which one communicates. And that is thereness. So thereness and communicatingness are punishable things by those who desire to entrap. And they are good things to those who have some tolerance for and some desire for freedom.

“So we get the make and break of personality, of beings above and below a theoretical line. And above this line a person would find nothing terribly wrong with thereness and he would certainly find nothing wrong with communicating or being communicated to. And above this line he can survive as himself in full knowingness. And below this line we would have an obsession to punish or a feeling that there should be punishment for thereness and communication.”