Blown For Good – the book

Marc Headley and I don’t see eye to eye much on LRH and Scientology.  He has his views and I have mine and they are often divergent. Nonetheless, Marc has produced a narrative of his life in the Sea Org that I consider an important read for anyone wanting to understand the current state of the church.  I wrote the Foreward for Marc’s book and he authorized me to publish it on my blog to raise interest in his work.  I believe the Foreward explains why I consider Marc’s book an important piece of the “how was Scientology hijacked?” mystery. For ordering info: http://blownforgood.com/

After reading the first several chapters of Blown For Good, I made a mental note to write the author an email. I was going to suggest he have someone else write an alternate Foreword because he might not like what I have to say. While Marc Headley and I were stationed at the same international headquarters property of the Church of Scientology’s elite Sea Organization for nearly fifteen years, his views of some of Scientology founder Hubbard’s writings and my views differed greatly. I never had time to write or send the note because I could not put the manuscript down. I was  gripped by Marc’s personal story.

I came to find that while Marc’s opinions about occurrences we both experienced varied from mine, there was every reason they should. After all, Marc did not get into Scientology on his own volition. As a child his mother willed it upon him. I got in after two years of college entirely by my own choice. Marc was forced by circumstances to join the Sea Organization. I had willingly signed on in order to fulfill a purpose. Naturally the way we read material and viewed matters would disagree. Nonetheless, when it came to relating facts – without regard to view or opinion – Marc’s recollection and accuracy were remarkable.

Recognizing that Marc and I had utterly divergent reference points from which to view largely the same culture and experience, Marc’s account became that much more fascinating to me.  I began to wonder, how many people had I interacted with over twenty-seven years within the Church whose back story aligned more with Marc’s than mine? On reflection, I decided probably more members of the Sea Organization (some eighty-five hundred strong when I left in 2004) who constitute the management of Scientology internationally had a frame of reference closer to Marc’s than mine. After all, over the past thirty years Scientology’s numbers of new members had been dwindling. The Sea Organization had increasingly relied on recruiting the teenaged kids of long-term Scientologists in order to keep its ranks filled.

A great deal of that majority were people whose lives I affected for better or worse from on high in the church’s leading ecclesiastical body, Religious Technology Center.  As I read how progressively insane the dictates from my controlling organization became as they literally rolled down the hill at international headquarters in the foothills of the San Jacinto mountains in Southern California, and how negatively they affected people on the receiving end, a deep sense of remorse enveloped me. Sure, I had sought out people I had known that I had visited injustices upon individually, apologized and made things right. But Marc’s book recreated a culture I knew of and influenced, but did not live of. As I read of the pain Marc went through I remembered dozens of others similarly situated whom I knew during my Scientology experience but whose lives and feelings I was never afforded an opportunity to understand.

Marc alludes to others who will be telling their accounts from within the upper echelons of Scientology and how this will forward reform and healing. Such a scenario reflects Hubbard’s prescribed system of management. Hubbard called for a remote management body to draw upon a multitude of reports from various points within an organization being managed, then coolly evaluating the facts to get the most complete and accurate view of what it is really like on the ground. Only then could an organizational problem afar be sanely and effectively handled. The system was called the Multiple Viewpoint System of Management.

Hubbard eschewed the notion that someone in an ivory tower – no matter how intelligent – can receive one report and then arbitrarily dictate what is to be done several thousand miles away. What Hubbard condemns is precisely what Marc describes as current Supreme Leader Miscavige’s day to day operating basis. His description of Miscavige’s obsession with handling everything himself, while preventing thousands of others from handling anything is not only very accurate it is also what Hubbard described as the fastest way to destroy an organization. Add to the mix Marc’s factual description of Miscavige as “evil and enjoy[ing] watching other people suffer”, and you have the perfect recipe for disaster.

Ironically, Marc supplies the first comprehensive and largely accurate report on the monster Miscavige has created which may mark the beginning of the only thing that can save the subject from the avarice of Miscavige. The multiple viewpoint system applied from without. The Lord knows, and as Marc makes clear, it can never be applied from within. And it is ironic that this report comes from the very person Miscavige has been spending hundreds of thousands of dollars to destroy for the past few years.

Marc’s account of the trials and tribulations one goes through in leaving it all behind captures the agony and ecstasy one inevitably experiences in following through with abiding by his or her conscience. It is not an easy barrier to break through. Before Marc’s book the only artistic expression that came close to expressing that passion for me was U2’s Walk On: and I know it aches, and your heart it breaks, but you can only take so much, Walk on… Marc has now provided a narrative that allows the reader to experience that treacherous ride for his or her self.

Finally, Marc deserves props for speaking out during a period when few with quality, inside information did. I know what he faced. I helped to create it. Hopefully this book will help to civilize it.

Crossed graph – what does it mean? 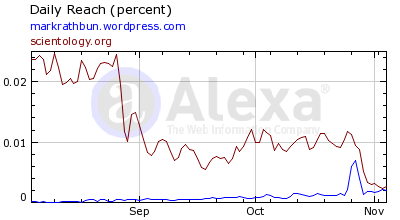 According to website stat tracking graphed by Alexa: the web information company, we just surpassed Scientology.org in reach.  Now, considering the fact DM has spent untold millions to have links to Scientology.org ads put everywhere on the web Scientology is mentioned over the past several months – and we have done zero optimization –  you reckon these stats have any significance?