Frankly DM, the Hamiltons don’t give a damn 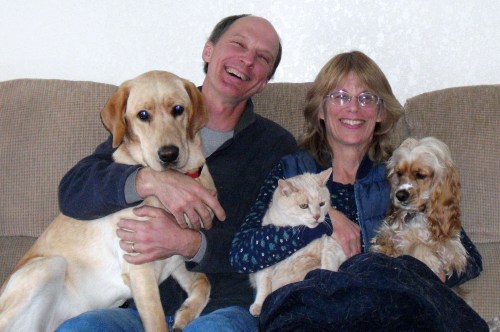 We will share part of it with you, so you can see that it must have been written quickly and under a lot of pressure to do so – thus it was general (in violation of writing an ethics order), full of out points and very inaccurate.

Number one, it says: “Mark and Lisa Hamilton of Henderson, NV”…now come on, don’t they read their emails? their mail? or any website? At least they could have looked in the phone book. We live in Gardnerville, NV – which is almost 500 miles north of Henderson…we have NEVER been to Henderson, nor do we even know anyone who does. We are debating if they are simply that sloppy or they thought there might be people trying to stay friends with us or find us and this might throw them off the trail….hmmm…

Secondly, it says we “were promptly encouraged to apply LRH policy [after we blew]”. Another blatant lie. Kirsten from OSA Int called Lisa’s dad to see if he knew where we were. He said no (which was the truth). Lisa wrote Kirsten a letter from Moose, Wyoming (as we were out and about seeing the Grand Tetons and Old Faithful) and said not to contact our relatives and we had no plans to come back at that point. We never talked to her or anyone else at that time or received any communication. We had NO comm from anyone in the church for about a year after that – after we had to flap about them not following the law as we could not get our year-end tax forms. The flap did impinge and got us our forms.

It says we violated HCO PL Leaving and Leaves as we “secretly planned to leave” – which is not true. We did not plan or talk about it until the morning we left – when we just could not take having our hygiene cut AGAIN in order to sit in a room and cold-call people and reg them for another Basics book package. We just decided to leave and left. No planning. Just pack and walk out. Then have fun driving to Wyoming.

The rest of it is just as bad or worse. We can’t even tell what they are referring to in parts of it, even though it is us who supposedly did these dastardly deeds. Besides the dropped out time on events, it says Mark was assigned to “simple administrative functions” – he was an executive in his org. It seems to be made of frustrated, whole cloth and we guess they are trying to somehow “dead agent” us so people think they will get sick if they talk to us.

Some months ago, Lisa wrote IJC and asked for our Freeloader Bills as we were going to at least start paying that. We NEVER got what those were. There was some sort of rigmarole between IJC and PAC Security where we guess they were going to try to get us to come down to PAC for the information – very obviously had some sort of plan as it was a big Q&A. But after Lisa would not agree to violating her integrity and only be friends and/or talk to who they said was okay, she could never get a straight answer from either IJC or the Security guard as to WHAT exactly was our F/L debt. In fact, neither IJC nor PAC Security have answered her last email from MONTHS ago. CJC, who wrote this dumb issue, never even tried to contact us…or on second thought, maybe he was looking in Henderson….

Now, you may ask, how, then, did we get the declare if they forgot where we lived? The simple answer is a friend found it and sent it to us for grins….which we did get and for which they are thanked for.

Lisa can take some responsibility for the issue being so bad, as Richard Valle, the CJC used to be her junior and she is no longer there to verify the data is accurate. His senior, Lon Kloeffler, the Snr I&R, (who unfortunately was also her junior) is not usually concerned with truth, but with making people look bad, so his innate meanness and twisting of the truth to suit the occasion would have blinded him to the errors. We are, though, very surprised with IJC missing the gaping out-points, but then he must still be off post regging for the IAS or the Basics. Who knows?

Realize that the truth is that the church terminals did not want us to have a copy of our declare as they knew it was ridiculous and it would be exposed as such. The same is happening to others…they are being declared and then being told they cannot have a copy of the issue as it is “church property”… it is pathetic and cowardly, really.

This may seem a bit harsh. However, it is being done tongue-in-cheek and with laughter in our hearts. We are alive, doing well in – GARDNERVILLE, NEVADA – and are applying Scientology to our lives – openly, freely and for the better.

We hope you are too.