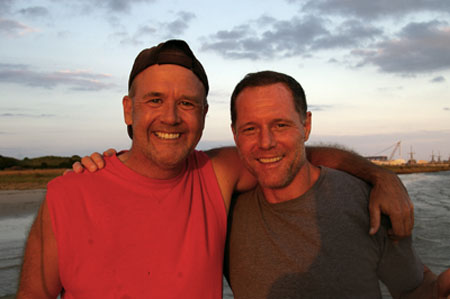 Jason Beghe was just written up by Village Voice editor in chief Tony Ortega for his important role in “crippling Scientology”, http://blogs.villagevoice.com/runninscared/2011/09/jason_beghe_top_25_crippling_scientology.php

While I respect Tony for his ability to confront the cult and his intelligence in understanding the goals and purposes of Independent Scientology vs those of Radical Corporate Scientology, I don’t see eye to eye with him on what Jason Beghe’s products and intentions are.  The video interview Jason did with Mark Bunker in early 2008 accurately captured the raw, painful truth that was Jason’s shortly after he made the lonely and courageous step through the wall of fire that is cutting ties with Miscavige’s cult.   But, to define Jason by that moment does him a tremendous injustice in my view.

Jason is one of my closest friends.  He spent a week at our home in August 2008.   We spent dozens of hours together on the deck overlooking the bay grappling with the subject of Scientology.   By the end of the week we had synthesized a vision.  That vision was to help Scientologists heal and to heal Scientology itself by means, primarily, of letting the truth be known.  Though the church, and apparently Scientology haters too, will never believe it, Jason and I concurred that to waste much time “fighting” or “taking down” Miscavige would be counter-productive.   Jason – who is one of the most intelligent and well educated people (and Scientology trained to boot) I have had the privilege to know as a good friend – understood when I demonstrated that Miscavige has sucked the church into a nightmare GPM (Goal/Problem/Mass – the positive/negative, resistance trap that makes one becomes what one resists) that now routinely produces the precise opposite (Problem) of what it postulates (Goal) resulting the in the destructive cult (Mass) it has become.

Jason is not out to “cripple” or even harm in any way “Scientology.”   Jason is all about the truth.  I’ll provide two examples to demonstrate that fact.

Jason went through ten years of the most vicious Black Dianetics within RCS (Radical Corporate Scientology).   It began in 1996.  Jason had completed training through Class V at Celebrity Center International (CCI).  Jason was such an effective auditor during his internship that a number of people began requesting that he by name deliver their Grades and NED.   CCI, as is the church’s wont, of course extended his internship because they were making beau coup bucks off their star auditor.

Then Miscavige decided overnight to destroy the training line up that L Ron Hubbard spent three decades perfecting.   Jason was told that he had to re-train because Miscavige had determined some unnamed people had messed up the tech.  Jason said “ok, let’s get started.”   He was told he had to go to the reg.  Jason, being Jason, then uttered the now famous words (paraphrase), “let me get this straight, you screwed up the tech, and you want me to pay for it? Get the fuck out of here!”

That began a ten year “repair”from hell for Jason.   At a cost of hundreds of thousands of dollars to himself, Jason was put through endless Ls repairs, NOTs repairs, FPRD, sec checking, and the most reverse, evaluative “ethics” imaginable. I know that for a fact because in 2002 while I was at CCI auditing Tom Cruise, Miscavige ordered that I check out the endless drama that had become the Jason Beghe cycle while I was there.   While Jason claims our couple of weeks together was the one bright light during that decade in hell, I too was making him wrong for his “counter intention” to “Golden Age of Tech” (Miscavige’s 1996 cancellation of the training line up of L Ron Hubbard).  Unfortunately, I was ordered to Flag to handle the McPherson case the moment I completed Cruise on NOTS (OT V, higher Scientology auditing level) and to drop Jason like a hot potato.  Had we stuck it out together perhaps we both would have walked in ’02.

Having met Jason six years later and having the opportunity to talk frankly with no censors or fixed ideas, I came to understand this:

Jason Beghe was persecuted and tortured for ten years because he had the integrity to stand up and say what probably 97.5% of Scientologists thought (but suppressed out of fear) in May 1996.
Second Example.  In April 2009 when the church learned that Mike Rinder was considering corroborating my story with the St Pete Times, Miscavige’s response was to send six cult members and two attorneys to Denver (where Mike then lived) to ambush him, threaten him and attempt to purchase his silence to prevent the truth from seeing the light of day.  The afternoon we learned of the plot, Jason hopped on an airplane immediately on his own dime, and we descended upon Denver from opposite directions as reinforcement for Mike.  The rest is history.

As to the assault case referred to in Tony Ortega’s article, again more context is warranted.  Within a couple of days of Jason returning home from the successful Denver mission, a RCS process server walked more than a hundred yards into Jason’s property.  The process server’s contact was handwritten on the subpoena he was there to serve. The contact was not a lawyer.  It was Greg Schulman, a former Guardian’s Office member and three decade OSA “Intelligence” veteran.   The process server applied many of the tactics to provoke Jason that we are all now familiar with being applied to me daily and to Mike Rinder for nearly a year.

Unfortunately, Jason was not as schooled in OSA’s tactics as Mike and I were and so his reaction was exploited.  Knowing all the circumstances I am proud to this day that Jason used as little force as he did in dealing with the situation.

OSA used teams of lawyers to work the Los Angeles Sheriff’s Office and the Los Angeles D/A’s office to bring a case against Jason.   They used the process to harrass him and cost him a lot of  time and money over two years.   Had we had more resources back then, we would have taken it to trial – I advocated for it from the beginning but we just did not have the resources back then to finance such an adventure.

I have had 11 (eleven) criminal cases brought against me by the RCS because of various restrained ways and means I dealt with people getting into my face constantly over time.  They have hired four law firms in Texas (including the largest one in South Texas) to lobby local officials to prosecute me in my own back yard alone.  Unsuccessful to date, and (knock on wood), in the future.

But I will tell you right now who kept me out of jail.  Jason Beghe.  Had it not been for the two years of hell RCS put him through, and the remarkable poise with which he handled it, there is no doubt but that by now I would have done something far more serious than the light open handed taps Jason used to usher a creepy lurker away from his then 4 and 6 year old sons and his wife.

Jason is a man’s man.

And for the benefit of David Miscavige and his thirty some odd anti-me web pages, I’ll make it crystal clear, something you can quote: