the sociopath next door 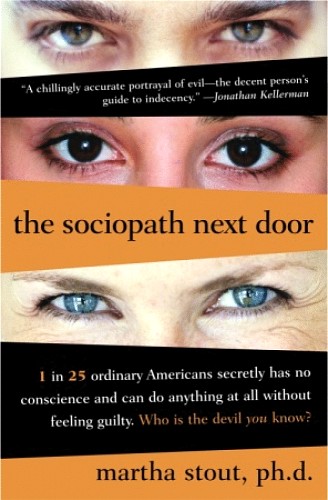 Over the past three decades David Miscavige has done his best to reverse the practice of Scientology. That is, the further one moves up the Bridge in the church of Scientology the more zealous, tractable, solid, narrow-minded, and in most cases miserable one becomes.  That is not to say that people cannot attain higher Grades and Levels of spiritual state and understanding. It means that those gains are manipulated by deceit and conditioning and stress toward molding a person into a conscienceless, deployable agent for an ill-intentioned cult leader.  Being the consummate covertly hostile suppressive person, Miscavige has managed to do so while stage managing a false identity to his public that he is L Ron Hubbard’s guy.

Miscavige is very well described in the Science of Survival and in PTS/SP technical bulletins, policy letters and lectures.  In fact, the reason why Miscavige could manage his complete reversal of the subject of Scientology with the willing help of thousands of staff members and thousands of once-well-heeled public Scientologists is all explained rather neatly in these Hubbard materials.

Becoming disaffected with the “church” and Miscavige, leaving one’s life works in the “church” behind,  some people have tended to leave behind some of what they learned too.  Most commonly, first and foremost they leave behind PTS/SP technology.  It makes sense.  After all, it is the technology that protects good people against people who intend harm to others.   And so many good people’s experience within the church proved to them that PTS/SP technology is faulty, does not work, or in many cases is the cause of their own travails.

Most people I have encountered who have left the church went through decompression periods of their own. That is, a length of time to destimulate (settle spiritually) from the collective, suppressive acts that finally prompted them to cut ties with the cult while trying to put those experiences into some kind of perspective against their new experiences in the outside world.  The lengths of those periods have varied from months to years to decades.

During my own decompression period I did not want to read or hear anything about Scientology.  That included reading Hubbard books or listening to his lectures.  While I never doubted any gains I had achieved and used my training in living life, delving back into the subject brought about depressing emotions with the recognition that the entity that “owned” the technology was for all intents and purposes destroying it.  I have found that many people shared that resistance during their decompressions.

But I never lost the love of reading and learning and devoured many books on other subjects that interested me at any given time.  Some of them helped immensely in giving perspective in evaluating my life, including my then twenty seven year experience in and with Scientology.  Some books validated and enhanced understandings I had attained from studying Hubbard. I have shared some of those books in the Recommended Reading section of this blog – see the subject bar on the home page of Moving On Up A Little Higher.

I am adding to that list a remarkable book that I just finished, The Sociopath Next Door by Martha Stout.  I am adding it because I think it might do quite a lot of good for a lot of people who left the church of Scientology.  Not only for those not wanting to review any Scientology material, but for anyone who has encountered David Miscavige or his minions dutifully carrying out his directives.

Stout is a clinical psychologist who specialized for twenty-five years in helping the victims of sociopaths.   The first half of her book shares her real life observations about sociopaths and the effects they have upon social personalities.  Her observations are remarkably parallel to Hubbard’s description of the Suppressive Person.   Note, modern accepted characteristics of the sociopath very closely align with Hubbard’s descriptions of the emotional tone level of Covert Hostility and of the Suppressive Person.  This is so much the case that I have taken to using the terms “suppressive person” and “sociopath” interchangeably.

Stout’s second chapter, ice people: the sociopaths, provides an actual case history that, but for career choice and resulting milieu of operation, could serve as the biography of David Miscavige.

Later in the book Stout gives another common denominator of sociopaths that again insightfully adds to one’s arsenal against being ruined by one, the pity play:

The most reliable sign, the most universal behavior of unscrupulous people is not directed, as one might imagine, at our fearfulness. It is, perversely, an appeal to our sympathy.

If you have followed this blog for long, you will know that I have several times wrote of Miscavige’s unnatural ability to paint himself as a victim.  As Stout notes, when a true sociopath is about to get caught out, he or she can very convincingly garner sympathy to divert attention from self.   Miscavige’s ability on that score has become institutionalized.  Virtually all International Association of Scientologist promo and briefings over the past two decades are outright fraudulent, falsely painting pictures of persecution against the cult.  Another example, the folks who have used 24/7/365 surveillance on my wife and me, who have overtly harassed us for 180 odd days running, with straight faces convince a clueless magistrate they must arrest me to protect them.

Stout recognizes the potential for suppressive/sociopathic groups, particularly “religious” ones.  Her description of one “church” sounds hauntingly like what has become of the conscienceless radical corporate church of Scientology:

The conscienceless organization, justifying any means by its alleged assistance toward an end, committing any crime against another person without remorse as long as it can be rationalized as forwarding the group’s power.

Perhaps most importantly, Stout describes how good, intelligent people wind up doing the bidding of a sociopath.

Why are conscience-bound human beings so blind? And why are they so hesitant to defend themselves, and the ideals and people they care about, from the minority of human beings who possess no conscience at all?  A large part of the answer has to do with the emotion and thought processes that occur in us when we are confronted with sociopathy.  We are afraid, and our sense of reality suffers.  We think we are imagining things, or exaggerating, or that we ourselves are somehow responsible for the sociopath’s behavior.

It goes deeper when it comes to an organization emphasizing the importance of hierarchy and authority. Along the way she gives probably the best sum up and analysis I have read of the Stanley Milgram experiments on how authority can trump conscience.

While the last 1/3 or so of Stout’s book meanders down a sometimes painful path of speculations about possible genetic sources for sociopathy, it still manages to impart useful observations.   It was useful for me in this respect, I was able to recognize that despite Stout’s wonderful contributions (and clearly unintended validation of Hubbard’s work) modern mental health practitioners, regardless of their evolutionary progress over the past four decades, are still shackled by their inability to perceive or unwillingness to credit the spirit or soul.

Just because one is out from under the influence of the cult run by the sociopath/suppressive person of all sociopaths/suppressive persons is no reason not to read this book and hopefully recount, and maybe even re-study your Science of Survival and PTS/SP pack.  Stout, as Hubbard did forty-five years ago, recognizes that our inability to properly identify sociopaths and prevent the havoc they wreak is one of the greatest threats to humankind.