Mark McKinstry – Another Dissemination Genius Arises from the Ashes

Some of you may know me. My name is Mark McKinstry.

I did my first Scientology service in October 1975 at the Davis Mission, while a student at the University of California. I joined staff a few months later. My staff experience has been primarily on dissemination lines:

I routed out of the Sea Org in 2007 and have been quietly off the lines since.

I am speaking up now.

For the most part, I was a productive and loyal staff member. My posts kept me on external lines for the most part. I worked directly with Author Services on Fiction lines and Central Marketing/GOLD on the non-fiction campaigns. My job was primarily to help create and present our Marketing and PR campaigns to major retailers like Barnes & Noble, Borders or Walmart and get them to order LRH books and set up promotions in their stores to display and advertise them. I also closed publishers in South America to publish LRH books in their countries. I established the Bridge office in Sao Paulo, Brazil.

As part of this post, I would go to the Int Base for meetings with Central Marketing staff and executives over these areas.

MY INTRODUCTION TO DM

In 1997, there was a plan to create a Scientology marketing campaign, similar to what had been done with Dianetics in the 80’s. The initial book to be “re-released” was SCIENTOLOGY: A NEW SLANT ON LIFE.

The advertising vehicle for NSOL was a TV campaign called GREAT LIES. You may remember it. A psychiatrist holding a brain, yelling “you are just a brain”. Needless to say, this campaign was not well received by my buyers and by the release date of the book, we had gotten orders for around 70,000 copies.

I was ordered to Int along with my Project Ops Don Arnow and after being put on the meter to find my crimes in front of WDC and IMEC, was given the ultimatum by COB that we either make a target of 250,000 books ordered by release or get kicked out of the Sea Org.

Being kicked out to the Sea Org meant the end of my career, my marriage, 22 years of work. This was the ethics gradient for non-compliance to a COB order. A destructive order at that.

If we were to make the 250,000 target and the books ordered did not “sell-through” to the consumer in 6-8 weeks, the books would then be destroyed and our relationships with the buyers who bought those books severely damaged. These consequences were known, but as COB had ordered it, so nobody questioned it.

Don and I with the help of some select CMU staff, put together a PR campaign video (riding on the publicity that John Travolta had been getting with Pulp Fiction) and used this to get orders for 270,000 books. To get this many books ordered at release meant books in every bookstore, airport, Walmart, and many grocery stores in America that sold books. We went to 40 states to do this, mostly by car.

The TV campaign was the bust that the buyers had initially predicted. Over 95% of the books were destroyed by the accounts after they failed to sell in the first two months.

We both were highly commended by COB for making the “do or die” target, had our ethics files cancelled, but severely damaged our goodwill with accounts. It was no victory for me.

Following the 911 attacks, I was attending the Frankfurt book fair in October and got word to return home ASAP I had received an order from COB to get 20 Dianetics books into every store in the U.S. on an immediate basis.

The facts were that 20 books per store, at the rate that stores had been selling Dianetics, would have been a seven-year supply per store. There was no marketing campaign, just the fact of 9/11and COB’s idea that this would increase demand for self-help books.

I proposed a plan that would gradually increase the stock in stores to 20 per store over a six month period, as we created demand for the books as there had been no Dianetics marketing being done for years. This was rejected and the “do or die” order stood.

This time, the “gun to the head of the salesman” did not work. I could not pass the “disagreement check” in order to fire on this sales trip. Others went in my place (and got no orders from any account). Some time later, I was labeled a “stat crasher” and sent to the Pac RPF.

It was there that I met almost 100 SO vets who had been offloaded from the Int base by orders of COB. Each one with the r-factor that they would be declared if they routed out.

I won’t fully recount here what the PAC RPF is like. At best it is a gulag where time stands still. The only thing that makes it bearable are the some of the dedicated staff there. Some had been on the program for seven years or more. That is seven years without a day off, no contact with wife or family, no music, twenty-minute meal breaks. A phone call to your parent’s on Christmas day. A day otherwise spent cleaning floors and toilets. For the most part the RPF is kept hidden from the public and staff. For the most part, we helped build sets for the Int events and furniture for the “Ideal Orgs”.

At one point, following an IAS event, the RPF was allowed to watch the video of the event where Tom Cruise receives the IAS medal and is proclaimed by DM as “the most dedicated Scientologist I know”. I looked over at the guy sitting next to me, a man who had worked on the ship with LRH, had been an SO member for over 25 years, who had been on the RPF for 6 years separated from his wife and family. Really? An actor who has been actively disseminating for a couple of years is the most dedicated Scientologist on the planet?

I finished the RPF program in 2.5 years (a relatively fast completion time) and returned to Bridge Publications. The trade lines (dissemination to raw public) were now completely dead. The national bookstore accounts had not even been visited in my absence. All the attention and effort was on setting up the Bridge manufacturing lines, repackaging the books and more sales to Scientologists (existing public). The HCOPL PROPORTIONATE MARKETING outlines how marketing should be done, with the majority going to raw public campaigns. The exact opposite of what is occurring.

The staff who had made some progress in the 80’s on raw public dissemination were for the most part either RPFed or declared. Most of these people were my close friends that I had worked with “in the trenches”: Ronnie Miscavige, Bill Dendiu, Fred Harris, Steve Hall, Jeff Hawkins, Gabrielle Allen, Phil Anderson, Yael Sherlock. Most declared Suppressive Persons. How could that be?

As an S.O. member not at the Int base, you would never know that they had been declared. They would just disappear off the lines with no mention of what had occurred. The only way I knew that Bill Dendiu was out of the S.O. was I met him at LAX on the way back from Brazil. Someone that I had worked with for almost 20 years.

WHY I AM SPEAKING OUT

When I heard that Mike Rinder had blown, I began searching the internet to see if I could find some trace of him. I had not worked much with Mike directly, but we were involved in many of the same campaigns. At one point when I was being “investigated” I got word that Mike had stood up for me at a meeting at Int. You never forget something like that.

Everyone is your friend when you get commended by COB. But your real friends are those who stand up for you, when it is not popular to do so. It is so easy to find fault with another staff member, much harder to defend them, because in this environment you open yourself the to charge of having mutual overts or in some way defying “command intention”.

What Marty and Mike write on this site is true. It is the only vehicle that I know of that fills the vacuum as to what has been going on. It is information that few Sea Org members and Scientologists are privy to. S.O. members are denied access to the internet for the most part, with filters to keep them from seeing sites like this.

To see Freedom Magazine come out with its “investigation” on ex-S.O. Really? Freedom magazine? There aren’t 4th dynamic abuses worth exposing? We need to convince everyone that anyone who dares to have a contrary opinion is open to have 25 years of service pilloried? I don’t agree.

The reason that people have to go outside the Church to make themselves heard is obvious. The “Emperor’s New Clothes” is in effect full time internally. Who is going to question DM, let alone depose him?

I support Mike and Marty in getting the truth made know so that it can be dealt with before the resources of Scientology are consumed in defending David Miscavige at all costs. Because if enough people don’t wake up internally as to what is going on, eventually the handling will be done externally.

In making this statement, I will be cut off from friends who are “in good standing” with the Church. Or declared. So be it.

If it is one less day that Heber or others have to stay “in the hole”, or the RPF, it is worth it. 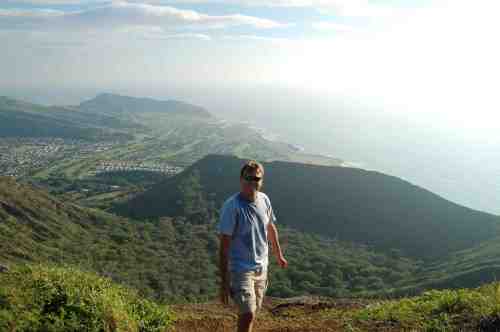