I don’t mean to keep harping on such a seemingly simple week of activity.  It is illustrative however of the suppression that has become Radical Corporate Scientology under the misdirection of David Miscavige.   So I consider it relevant.

We’re done in LA for the moment.   We want to express our gratitude to the wonderful independent Scientologists who made our work possible against a well financed, zealously executed program to stop HELP.   Michael Fairman’s and Joy Grayson’s roles have been covered in a previous post.

What is not known is the behind the scenes work of the incomparable Garcia family (Luis, Rocio, and Ivan).  They engineered and financed and executed an elaborate scheme to make our work possible and free me up to get it done while also keeping a number of other ongoing 3rd dynamic projects on track.   No grand standing, no motivation for recognition,  just straight forward HELP came from the Garcias.  This, in my view, is what Scientology is all about.

Finally, some words from my dear friend Renere (Ray-Ray) Lopez.

AN ACT OF MERCY

Thanks for taking the time to write about Marty’s experience here in OC.  It’s my family that’s going through these tough times and I can’t express how much Marty’s efforts have eased the pain with my mother of 73, my sister’s 11-year old daughter and my 20 year old nephew.  He has come out here to spend time with all of us, but mainly to assist my sister Gina who just had her 50th birthday and is slowly going through the degradation process from Kidney Cancer throughout her body.  We were originally supposed to fly out to Texas together, but her cancer had spread faster than we had anticipated, so out of Marty’s kind heart, he came to her and my family. 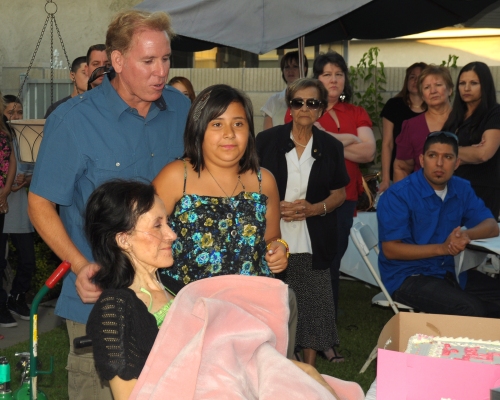 About 8 years ago I was fortunate enough to give her some Book 1 Auditing and she had an amazing experience and of course  huge cognitions.  Unfortunately she didn’t experience the “Implant” that so many of us are aware of, which I’m sure would help her figure out how to handle this process.  What Marty has done is granting her so much beingness and has spent many hours with her to ease her anxiety through this process.  You mentioned that he’s out here for a “Mission of Mercy,” no one has any idea how much this means to my family and me.

As I mentioned above my mom is 73 and has never received any type of auditing experience.   Just after a few sessions she told me she was able to sleep through the night after many of days.  Also, I witnessed her actually confronting my sister in a way that I couldn’t have even imagined.  This is a 73 year old woman who should be stuck in her own religious and philosophical beliefs, but she went in with a full open mind and confronted many things–WOW!  To tell you the truth, I always thought it would be my sister Gina and I going out to Corpus Christi and auditing side-by-side and not my mother.  I always felt it was going to be the way it is with my mom, but after her experience auditing with Marty, Monique will now have a new PC here shortly.

You mentioned the experience you had while at OC Airport and I too had a similar experience with him, but it was far more severe while he was leaving my house.  The best way I can explain what I experienced was the television show called “The Streets of San Francisco” back in the 70’s.  These guys came out of nowhere and completely stopped traffic during rush hour on Santa Ana Blvd right next to the Amtrak train Station.  I had my 11-year-old niece in the car with me and several times they tried to ram us.  They even drove up the curb trying to catch up to Marty’s car.  There must have been 5-vehicles driving completely erratic with no regard for pedestrians or the other vehicles.  Also, Leblow was in full force of Road Rage and I could see how determined he was to make what ever means possible to hurt Marty and anyone who stood in his way.  One thing he didn’t expect was I was raised here in Santa Ana and I’m as street smart as they get.  Yes, we out smarted him in every attempt he could comprise with no avail.  I even stopped him from entering the 5-freeway going northbound by stopping him at the onramp- traffic signal by putting myself in front of his SUV.  He even taunted me several times and finally pushed me with the front of his vehicle.  I went down on the pavement to ensure he wasn’t going anywhere, since he could face hit-and-run charges, and I’m sure everyone who witnessed the incident was shocked to see what had just happened.

Finally the Fire Department showed up on the scene as well as the Santa Ana PD and the Highway Patrol while all the while Marty only had to contend with one of his goons, which he too was lost in the traffic.

Leblow finally met his match and it’s a shame that all the money DM has spend on him he couldn’t even out smart a non-professional PI.  Can you believe someone finally stood up to them?  I think this is like the book, “The Tipping Point” for DM and his goon squad.

So Marty, many thanks to you for continuing to put yourself out there for all of us.