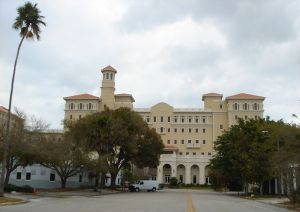 By her own vigilance and a simple twist of fate Debbie was temporarily reprieved from the living hell of the Hole. Having missed his May 9th event target for releasing the Basics, DM then scheduled a special Maiden Voyage at Flag release event.

Catching wind of this Debbie very artfully indirectly got word to DM that such a plan would fail miserably without Debbie on the scene coordinating the massive logistics required to pull it off at Flag.

DM did order Debbie back to Flag and she managed to get back on her Capt FLB post. However, after using her credibility to lure in the public and make them buy into DM’s “New Era of Knowledge”, DM had her completely de-powered. He briefed the RTC Reps and the CMO on how “1.1. and evil” she was, how she had “sabotaged everything”. The briefings included a number of alleged lies that Debbie had allegedly told him about Flag renos/construction – that of course, as per usual, were utter inventions of DM’s paranoid mind. RTC Reps and CMO terminals were shell shocked. Last time they saw Debbie she was DM’s Golden Girl, getting promoted to Int. They, however, put their own perceptions aside to carry out “command intention” with gusto.

DM had RTC Reps gunning for Debbie. Ty Webb had replaced my former wife Anne as RTC Rep Flag. Anne had been sent to Int to do DM’s dirty work there. Other RTC Reps came in and out, such as Lurie Belotti from the ship, all briefed to hound Debbie, which they dutifully did.

This was the final decimation of Flag. Debbie, her staff, and FSO executives were pounded to do nothing but “sales and sign ups for the Basics”, and all standard FSO business went by the wayside – treated as a nuisance. DM dictates such as “all base execs and crew do not go home at night until all Basics quotas are met” severely disestablished what Debbie had spent nearly thirty years helping to put there.

All the while Debbie was suffering from a physical condition; one which more than anything required proper nutrition, exercise and rest to handle. Under DM’s “Basics” drive, instead Debbie was subjected to bad nutrition, no exercise, little rest. To top it off, DM – as is his standard operating procedure – saw to it that Debbie was taken off of Solo NOTS, and was instead subjected to continuous invalidative sec checking.

Debbie continually originated that her physical pain was intensifying. Every origin was ignored. Finally, she was pulled in for a Severe Reality Adjustment by RTC Rep Ty Webb to “stop motivating”, and put on a “COB ordered Ethics program” which included “M-9 the entire Ethics book.”

Debbie’s freedom was being systematically destroyed. She was prohibited from driving. She had a full time CMO guard on her.

During this campaign to disgrace Debbie in her own house, FSO was being converted into the Reg factory it has become. Debbie’s only ally and comfort was her husband Wayne Baumgarten. DM’s vampire insticts picked up on some external force keeping Debbie’s head above water and soon Wayne was pulled in to Security FLB and subject to DM’s Shock Doctrine. Wayne was told confess to suppressive acts. When he expressed surprise, he was told he was going to the RPF. He could either go for the crimes he confesses, or for withholding the crimes – and that if it were the latter he’d be in for a far more unpleasant experience than if he were to choose the former.

Debbie recognized she was losing the last (and most important) part of her life in Wayne and so drawing on her personal persuasion skills she had honed over the past thirty years, she somehow convinced Security to allow Wayne to visit her one night at the Hacienda.

The next morning, Debbie and Wayne were transported to the base by her guard in a Flag van. Debbie convinced the driver to stop at the galley in the Clearwater bank building so that they could pick up some breakfast. The guard pulled up to the CB, got out and went into the CB to get the food.

When the guard disappeared into the building, Debbie jumped into the driver’s seat and sped off. She and Wayne drove to a rental car lot, rented a car, and left the van behind.

It did not take long for the OSA dragnet to kick into action.